Salaam Alaykum lovelies!;) Today I attended the Carnival I-Raudah at Masjid Al-Hidayah, Taman Melawati as a guest for the 'Circle Talk' and model(?) hehe..The carnival is basically something like the 'Sure Heboh' Carnival but with a more Islamic approach.

As always, I had my husband accompany me(even though he had other work to do) so thank you encik suami:) We arrived early in the morning at about 8am at the Mosque, where I bumped into Shea(also appeared on the show). We made a small appearance on the 'Nasi Lemak Kopi O' morning show and as the day progressed, there were so many interesting things happening at the carnival like 'Tanyalah uztaz' program, Saffiya, futsal, coloring competition, 'Upin & Ipin', and so much more!! Plus they had a Raya buffet! Nasi lemak, Laksa, Lemang, Rendang, Roti Canai, you name it! *Omnomnomnom* 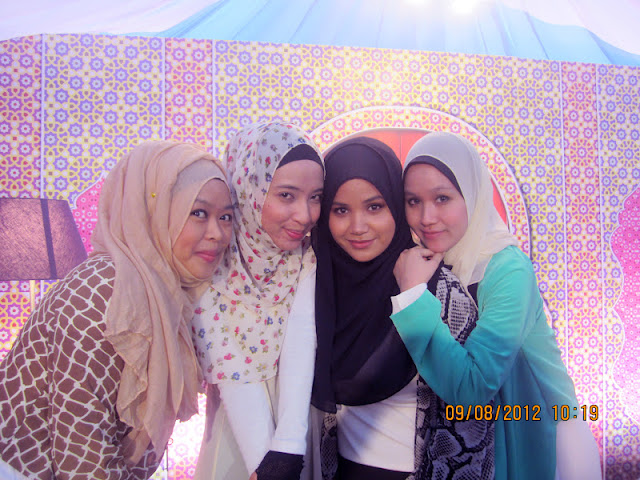 In the evening, we modeled for the new collection from Old Blossom Box (didn't snap any photos since mr.hubs wasn't allowed in). Afterwards, we(Lyna, Jezmine, Shea, Adriani and I) were interviewed by Diana Amir & Liyana Hisham in a segment called 'Circle Talk'. I thought it was a very beneficial talk/interview session since we were given the opportunity to interact with the audience and share so many things with them like fashion tips, experiences, daily struggles of being Muslim women, transformation from before wearing the hijab and so on. It was such a fun & humbling experience:)

The I-Raudah Carnival will be at 2 other locations, so make sure to check out TV9's FB Page for the locations! Till then!xx
Labels: Fab Events Press/Media